What is a choroidal melanoma?

The term choroidal melanoma describes a malignant tumor formation in the eye.

Doctors understand the term choroidal melanoma to be a cancer of the eye in which a malignant tumor forms.

This arises directly on the choroid (choroidea), from which the name of the disease is derived. It is the most common type of cancer in the eye: statistics say that it occurs about 6 times in 100,000 people. People who have passed the age of 50 are most affected; a particular accumulation can be observed between the ages of 60 and 70.

The disease is often only diagnosed at an advanced stage. Around half of the choroidal melanomas diagnosed are therefore only treated after metastases have already formed in other organs.

The causes of choroidal melanoma are not yet fully understood. The disease always arises when melanin-containing cells in the choroid begin to degenerate and in the course lead to malignant tissue growth.

Scientists have not yet been able to clearly determine why this degeneration of cells occurs in some people. It is believed that UV radiation has an influence on the development of cancer.

However, this influence is estimated to be less than in the development of skin cancer (cutaneous melanoma ). A low presence of pigments is said to be related to susceptibility to choroidal melanoma. Statistics show that fair-skinned people are 150 times more likely to be affected by the disease.

A choroidal melanoma does not initially cause any clear symptoms. Only with the progression of the disease do various complaints arise, which mainly affect the eyesight. Those affected often suffer from visual problems such as double vision or a blurred vision. Usually there is also a shadow in the field of vision, a so-called scotoma.

This manifests itself in a subjective darkening of the field of vision on one or both sides, which increases in the course of the disease and ultimately leads to permanently impaired visual performance. In addition, a choroidal melanoma can lead to distorted perception, deterioration in farsightedness or macropsia, in which objects are perceived as larger than they are.

In individual cases, the tumor can break through the dermis, which is noticeable, for example, in pain and an acute deterioration in vision. If the melanoma spreads to other parts of the body, more symptoms can occur. Depending on which part of the body is affected, the internal organs, bones or skin may fail. The lungs and skin can also be affected. Metastasis can manifest itself in the form of tenderness , paralysis, sensitivity disorders and a general decrease in physical and mental performance.

A choroidal melanoma is often only noticed by those affected when the disease has progressed. If a doctor is called in because of symptoms such as impaired vision or seeing shadows, he or she can often detect the tumor during a general examination of the eye.

With the help of an ultrasound examination, the so-called echography , the size and the exact location of the tumor can be determined. If a choroidal melanoma is not treated, the visual disturbances will lead to pain and possibly a detachment of the retina.

As the disease progresses, the patient may lose their eye. If metastases form and spread to reach the liver, for example, the disease can be fatal.

Treatment of the choroidal melanoma is essential and should be done as soon as possible. If no treatment is given, the eye cannot be saved. Since tumors can form in the body, in the worst case death occurs.

Radiation therapy is one of the most common treatment methods. The eye is preserved. Complications of this treatment are that the optic nerve itself has received too high a dose of radiation. This can lead to partial or even total loss of vision.

Another treatment option is irradiation with a particle beam from nuclei of the hydrogen atom. The advantage here is that almost only the tumor can be irradiated and the neighboring tissue is spared. However, not every tumor can be treated with this method, since it depends on its size and location.

A final treatment option is to remove the eye (enucleation). In this case the tumor has been removed, but there is no absolute certainty that daughter tumors have not already formed. The main disadvantage is, of course, the irrevocable loss of vision. You may experience pain after the procedure. In addition, albeit rarely, there is the possibility of a bruise and infection, which may make it necessary to remove the inserted implant.

When should you go to the doctor?

In connection with the fact that it is a tumor disease with a high risk of metastasis, a visit to the doctor is urgently recommended. If suddenly blurred vision or a general deterioration in vision occurs, as is often the case with malignant uveal melanoma, it is advisable to see an ophthalmologist .

Especially fair-skinned people who already have birthmarks on the choroid are a risk group. Most choroidal melanomas are discovered by chance during routine examinations, however.

If a choroidal melanoma is considered probable, the person affected should not forego having this clarified more precisely as quickly as possible – also by taking a tissue sample. It has been shown that the form of the choroidal melanoma, in which the cells have a monosomy 3, are particularly prone to metastasis. Investigations for any existing metastases should follow.

A choroidal melanoma can lead to a number of complications if the position and shape are unfavorable, most of which involve the colonization of other organs with cancer cells. Accordingly, therapies for melanoma should not be postponed. There are many treatment methods available to those affected, the effectiveness of which is determined by the exact type of tumor.

During the therapy and also during the ophthalmological follow-up, the liver is examined, because this is particularly often affected by the formation of metastases.

If a choroidal melanoma has been diagnosed, the treating doctor will initiate appropriate treatment. If the tumor has not grown too big, it can be treated with local radiation therapy (this is called brachytherapy).

For this purpose, a radioactive plate is sewn onto the eye under local anesthesia and remains there for up to 14 days. Alternatively, the tumor can also be treated externally with proton radiation therapy. This therapy is also suitable for larger tumors. If all types of radiation are not available, the malignant ulcer can also be surgically removed under certain circumstances.

If all of these treatment methods fail, the eye must be completely removed (enucleation) to prevent the cancer from spreading to the rest of the organism. Even after successful treatment for choroidal melanoma, a comprehensive physical examination must be carried out regularly to rule out daughter tumors. Since the choroidal melanoma itself can in rare cases be a secondary tumor for a cancer that exists elsewhere, a detailed general examination is advisable even before the start of therapy.

If the disease is diagnosed and treated early enough, the chances of a complete cure are very good, as the cancer generally confines itself to the eye for a long time before metastasizing.

More recent findings on the likelihood of metastasis from the Essen University Hospital and Charité Berlin, however, suggest a different picture: the choroidal melanoma can form micrometastases very early and metastasis occurs almost exclusively due to a monosomy 3. So it is neither from the early detection of the tumor nor from his Size dependent.

In most cases, the choroidal melanoma leads to severe restrictions on the eyes. This mainly results in visual disturbances, whereby a visual impairment can also develop that was not previously present. The choroidal melanoma makes everyday life for those affected more difficult. In many cases, psychological complaints also arise, as the patients are afraid of complete blindness. As a rule, the affected person becomes completely blind in the eye if no treatment is initiated.

In many cases, irradiation is initiated during treatment, but this can also damage the surrounding tissue . This removes the underlying disease, but the person affected can suffer from further visual problems. In the worst case scenario, the patient’s eye has to be completely removed. Implants can then be used to alleviate this discomfort.

However, in many cases the disease progresses positively if treatment is initiated early. There are no further complications. As a rule, life expectancy is not restricted because the tumor cannot spread very far.

Since the choroidal melanoma is a cancer, the causes of which are not yet precisely known, prevention in the strict sense is not possible. However, if the first signs such as deterioration in vision appear, a doctor should be consulted promptly in order to determine the exact cause and, if necessary, initiate therapy.

Direct follow-up care is not possible in most cases of choroidal melanoma. The tumor must be removed from the eye as quickly as possible to avoid further complications or metastasis. An early diagnosis and treatment of the choroidal melanoma have a very positive effect on the further course of the disease.

The disease is usually treated with radiation therapy or surgery. The person affected should take care to take care of their body and to rest after the therapy or after the procedure. Do not engage in strenuous activities or any other physical exertion or physical activity.

In the case of a choroidal melanoma, the region of the eyes in particular must be protected and treated with care. As a rule, the tumor does not spread to other regions of the body. However, regular examinations are still very useful and should definitely be carried out by a doctor.

You can do that yourself

Once the choroidal melanoma is diagnosed, there are a few things that patients can do themselves to accept the cancer and lead a full life despite the disease. It is important to have an active lifestyle with plenty of exercise and a cancer diet that is adapted to the respective symptoms and complaints.

Patients should include their own experiences and use this to make a change in diet that supports the healing process. Possible diets are, for example, the ketogenic diet , which is made up of fat, protein and little carbohydrates and sugar, as well as the oil-protein diet with products containing oil and protein. Patients can work out a suitable diet together with the doctor. Exchanging ideas with other people affected is just as important as having a healthy and active lifestyle.

Self-help groups for choroidal melanoma patients are a first point of contact where cancer patients can exchange ideas and gather information. Internet forums or a consultation with a psycho-oncologist are good alternatives. Choroidal melanoma can be treated well nowadays and sufferers should use this circumstance to increase their well-being through hobbies and a busy everyday life. 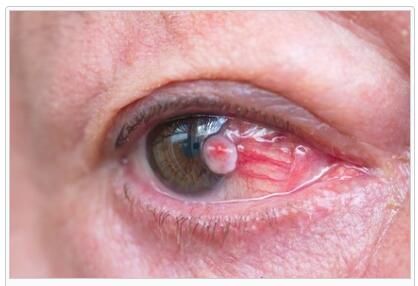