The term Bolshevik comes from the French language, although its etymological origin is found in the Russian word bolshevik (which can be translated as “one of the majority”). Bolshevik is the adjective used to describe that or that which is part of Bolshevism: the radicalized and majority movement of the Russian Social Democratic Labor Party, which had Vladimir Lenin as its leader.

The Russian Social Democratic Workers’ Party had its foundation in 1898 from the union of several Marxist groups. In 1903, when the second party congress was held, there was a split. The Bolsheviks, that is to say, those who reached the majority, adhered to Lenin’s proposals on the need to establish a dictatorship of the proletariat, uniting workers and peasants to fight against autocracy. The Mensheviks (the minority), on the other hand, embraced the more moderate ideas of Yuli Martov.

The division took place in 1903 at the Second Congress, which was held between London and Brussels. In this context, Lenin made the following proposals:

* The revolution needed an instrument that would allow it to advance towards socialism, and this could be materialized through the struggle to get the salaried industrial workers to seize political power instead of allowing it to continue to be in the hands of the bourgeoisie (This state is called the dictatorship of the proletariat);

* In order to put an end to the Russian autocracy, to achieve the goals of the revolution regarding democracy and to confront the betrayal of the bourgeoisie, it was necessary for the peasants and the working class to ally themselves;

* the peasants were to receive parcels of land once the latifundios, that is, large agricultural holdings, were liquidated;

* The nations that suffered oppression by Russia deserved recognition of their right to self-determination, that is, to make decisions regarding their social, cultural and economic development, to define their structure with freedom and to choose their form of government;

* to be a member of a party it would be necessary to belong to one of its organizations;

* In order that the proletariat, allied with the classes that suffered the oppression of tsarism, had political power, it was necessary that they build a party. The democratic centralism, a method of organization characterized by the democratic election of certain bodies within a political party to take charge of making decisions, was the basis on which they relied.

Lenin (1870 – 1924) was the leader of the Bolsheviks and the one who promoted the revolution of 1917. He also became the main leader of the Union of Soviet Socialist Republics, known by the acronym USSR.

According to DigoPaul, another important leader of the Bolsheviks was Leon Trotsky, who was actually first close to the Mensheviks and opposed to Lenin, but later a key player in the 1917 revolution.

The elections of the members of the Assembly were held on November 25 of that year, and there the Bolsheviks obtained 24% of the votes, which is why they did not seize the power they sought. That same night, Lenin managed to invalidate the results and dissolve the Assembly, so that the Bolsheviks became the supreme authority. 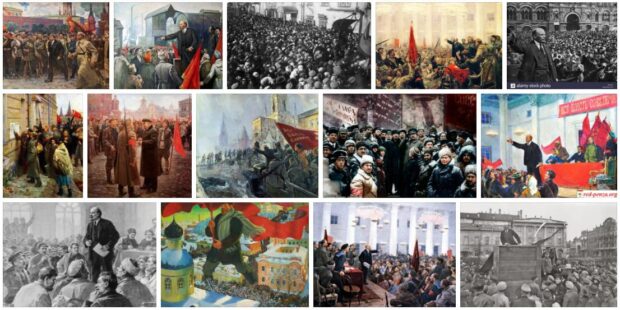