One of humanity’s most serious problems at all times, poverty has worried economists like Adam Smith, who, in 1776’s The Wealth of Nations, said: “No society, most of whose members are poor and miserable, can be prosperous and happy. ”

Poverty, in a generic sense, is the lack of essential means to guarantee survival. Strictly speaking, the basic needs are those related to the maintenance of life; in a broad sense, they depend on the standard of living of each community. Thus, the person whose deprivation places her on the verge of death can be called poor, or the person whose nutrition, housing and clothing, although sufficient for the preservation of life, are of a lower quality than those of the general population. Poverty is defined according to different temporal and spatial parameters.

When it has a limited duration and is widespread, poverty is characterized as cyclical. In countries with low industrialization, the occasional inability to provide basic needs stems from seasonal food shortages, caused by natural phenomena or poor agricultural planning. In industrialized nations, where the standard of living depends on the economy’s ability to generate wealth and employment, it stems from economic crises, such as the depression of the 1930s. The effects of economic recessions – high unemployment rates and reduced production and national income levels – mainly affect the poorest sections of the population, lacking alternative means of survival.

The relatively constant lack of means to meet basic needs is called collective poverty. It can be generic, when describing the average standard of living of an entire society, or concentrated in segments of a prosperous society. In the first case are the underdeveloped countries, in which the national income set would not be enough to maintain the populations even if it was divided equally by all citizens. In this context, many countries in Asia, Africa and Latin America are located. In the second, there are the groups that live in the periphery of the great American and European cities, constituted mainly of immigrant workers or those coming from the rural environment. In any of these models, the affected populations have low life expectancy, diseases caused by malnutrition and high infant mortality rates.

Individual poverty, like collective poverty, has a permanent character, but its area of ​​distribution is limited to the individual or family unable to provide for their needs, even when living in a prosperous community. It can be generated by physical or psychic impediments. Class poverty is characteristic of a low-income social stratum, maintained in these conditions by racial, educational, home and employment discrimination. In almost all societies in which there are two or three ethnic groups, the one below the social scale is poor.

Modern societies have found that poverty is not an inevitable or uncontrollable evil and seek to mitigate its effects with measures of social policy, such as the establishment of the welfare state and the defense of economic programs based on the fairer distribution of wealth. Despite these measures, poverty not only persisted but worsened in the second half of the twentieth century. According to data from the United Nations, the proportion of poor people in the world population remains very high, although the wealth of nations has multiplied several times.

Reality in the country since the colonial period, poverty has worsened with the developmental model adopted since the 1930s, which, despite emphasizing industrialization, left an obsolete agrarian structure intact, in which land tenure is restricted to a very small number of people, and encouraged an income concentrating system.

The authoritarian period that began in 1964 maintained the economic model in the 1970s and 1980s, a period that was characterized by several global recessionary crises. The national wealth increased, the agricultural and industrial process became more sophisticated and covered the most diverse productive areas, among them the cutting-edge technology. The membership, however, worsened. The rural exodus led to a disorderly urbanization. A large contingent of unemployed people, which Karl Marx called the “industrial reserve army”, installed themselves on the outskirts of cities, usually in risky areas such as the hills of Rio de Janeiro, and turned to marginal activities, outside the jail. legal productive. Cities swelled, urban spaces deteriorated and misery became part of the daily lives of urban and rural populations. There are areas throughout the country where poverty is the norm, not the exception, as in many municipalities in the North and Northeast and in pockets located in wealthy states such as São Paulo, Rio de Janeiro and Minas Gerais.

The process of redemocratization in the 1980s coincided with the awakening of the national conscience to the ostensible presence of the most tragic face of misery – endemic hunger, which affects millions of people and leaves indelible marks, such as the dwarfism found in the populations of the Northeast . The fight against misery, its causes and effects, became the major social and political topic of discussion and engagement of civil society and government institutions in the 1990s. 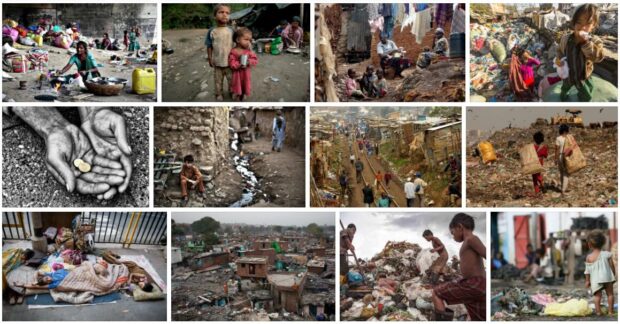